Several tons of rubble were delivered to the site on Wednesday.
With another early start today, Roger had it spread and rolled by 10.00am. Much easier than shovel and barrow! 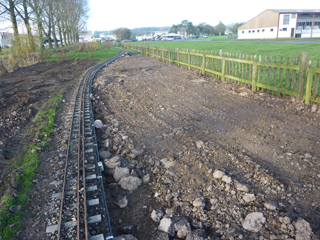 Twenty tons of road planings are due to be delivered this coming Wednesday to "blind" the rubble, and provide our working level.

The day was begun by setting level pegs to indicate the depth to which road planings would be spread, allowing for the thickness of the concrete to provide the running surface.
An ESSMEE member, farmer David Sedgman, who has access to a large dump trailer, arrived at noon with the first load, and by mid afternoon this had been spread as shown below. 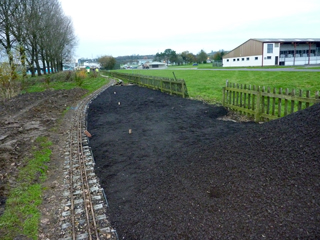 Shortly afterwards, David arrived with the second load, making 21 tonnes in total. A start in spreading this will be made on Saturday. 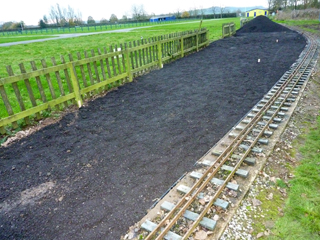 Progress is being made! 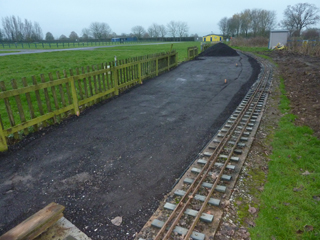 Impressive progress David, very much looking forward to playing on it next year.
Top

Thanks for your support. We'll do our best not to disappoint.

Shuttering for the arrivals road of the new yard was completed on Wednesday 10th December, and the concrete was poured on Saturday 13th.
The shuttering was removed yesterday, and the results can be seen in the pictures. 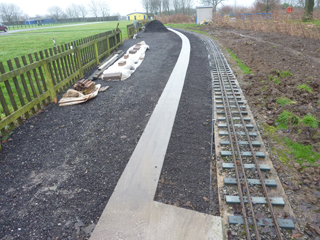 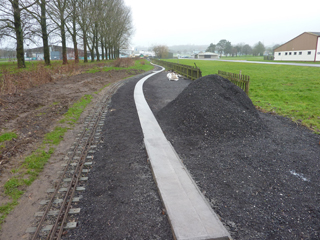 Weather permitting, work will start again in early January 2015.
In the meantime, best wishes for Christmas and the New Year to all GL5 members from ESSMEE.

A long time since my last posting regarding progress on the lower yard at the Bath and West Railway.
As can be seen from the pictures three of the four roads are complete, and with rail on order, road four should be finished by mid September in good time for ESSMEE Open weekend - 3rd and 4th October 2015. Please put the date in your diary.
Unfortunately, the return link to the main line will not be in place until some time next year since future work will be concentrated on the replacement of track serving the carriage shed adjacent to the club building. 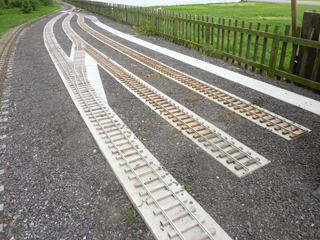 Looks good David , did you lengthen the headshunt in the end as when we were there it looked a bit short for a loco and driving truck , hope to get down for the open weekend , perhaps only 1 day .
Top

It has been lengthened but far less than I had suggested was desirable especially as there was more than enough space available. Hopefully it can be extended further at a later date.

Look forward to seeing you at the open weekend.
Top

Having waited for all the leaves to fall from the trees alongside the main line, both upper and lower yards have now had the ballast spread. Much improved appearance now.

It's anticipated that the next job will be to add a passing loop to the line between the two yards. 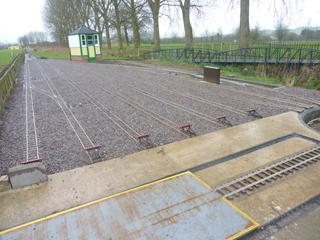 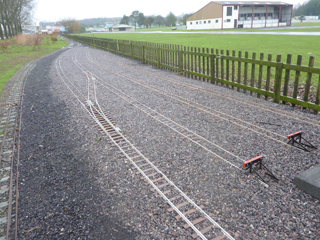 Norman Yorke, the oldest member of ESSMEE died recently at the age of 93 years. When the club began developing our site at the the Bath and West Showground, Norman donated a small timber building for use as a signal box. Subsequently, when a new box was constructed, the old one was moved to stand between the main line and the 5" yard.
Towards the end of last year the box was repainted in the old Southern Region colours, and at a recent meeting of the 5" group it was decided to call it YORKE BOX as a memorial to Norman. Southern style nameplates were made and fitted to the box during this week. 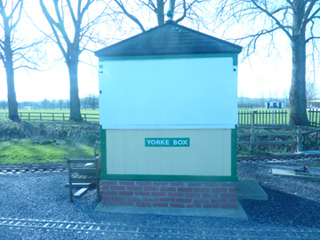 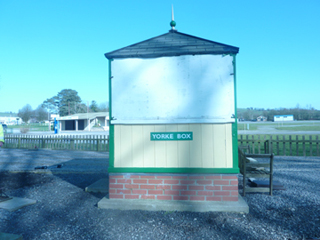 Sorry I didn't see this message before, and sad news about Norman - I certainly remember him! I remember also going to collect this signalbox from his garden and following it back to the showground, hoping it wouldn't collapse and be collected by my car! I think Kevin spray painted something like "Doctor Who on tour" on the base, his knowledge of knots helped lash it to a trailer. This 'box had a history as a customs shed at Bristol Docks?

I remember the work you put in restoring this as the ESSMEE MKI signalbox, and it served it's purpose very well. It's good to see it in continued use.
Top

Yes, Norman was quite a character, and will be sorely missed. His Widow, Eppie, was very pleased when I suggested naming the old box "Yorke Box" as a memorial to him. We hope to get her down to the showground at some time to see it, or perhaps even carry out a ceremonial unveiling.
Subsequently, I have purchased Norman's 7 1/4" Class 66, and although I believe none of the originals were named, am thinking of having engraved plates fitted to the bodywork - Norman L. Yorke.
Top
Post Reply
75 posts

Return to “Track and Earth Works”