With yours and Richard's complete to add to Dave and Bill's that were on show at the latest rally we're well on the way to a respectable rake. Unfortunately I missed the chance to view your progress as I spent most of my time behind the engine but I did see it from a distance and it does look well on the way to completion! Out of interest are you still intending to do a riveted version?

Yet more progress and looking good!Bill's 21t which was running this August I would say is slightly behind yours in terms of remaining work so you really are not that far away from completion!With regards to the day in front of the lathe we may be able to come to some sort of arrangement there!

Afterall i'll need to do all the same turning's for my own 21t hopper and I may have just stumbled across a solution to speed up my own 21t build!

To compliment this topic, for those who haven't already seen it search for 5" 21t hopper on You Tube, I'd include the link if I could but unfortunately I can't access You Tube from work.

Also we managed to arrange a line up of 5 16t minerals and the 2 21t hoppers on the Monday at Gilling, when I finally make it home I will post a picture! Hopefully the start of 2 very impressive wagon rakes with the Lindsey 16t project on the go and other projects on going in the background!

Paul wrote:
To compliment this topic, for those who haven't already seen it search for 5" 21t hopper on You Tube, I'd include the link if I could but unfortunately I can't access You Tube from work. 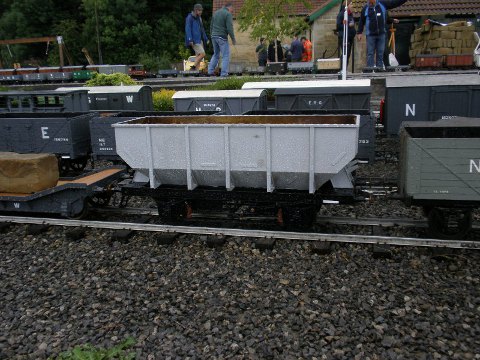 And here's one of my wagon in the workshop, wheeled with temporary springs. 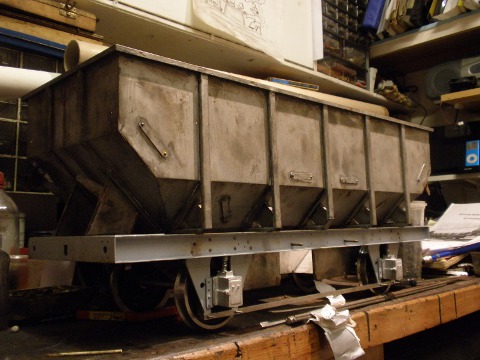 Work is temporarily on hold whilst I'm doing a bit of maintenance of the Adams Tank, but I should get back to it in a couple of days.
The riveted hopper is still on the cards Paul. I'm accumulating materials, but more importantly I am gaining knowledge by building the welded version and will soon settle down to complete the drawings. Wagons are much more complicated than I thought and I've decided not to do my usual trick of starting to make the model with the drawings half done. This would inevitably leave me with holes and rivets in inaccessible places with no way to dismantle the job to rectify the errors.

That video of the hopper emptying is amazing. http://www.youtube.com/watch?v=7G2_AXeaTSA" onclick="window.open(this.href);return false;

I like the way very little force is required to release the door and then coal just flows out neatly. Nice bit trackwork too.

Keep up with the posting info on the builds. Sorry i am not doing any wagon stuff at the moment.
I'll post something in workshop on things i have been doing to the loco.

When Dave wrote to me "the clearances are a bit tight" on the door operating mechanism he was not wrong!

Sort of like when I made my first Walschaerts valve gear, I was never really sure how it would work until it did!

I assembled the door operating gear last night and to my delight it worked. I turned the hopper over to press against the doors and check they were "locked" which indeed they were. I flipped the chassis over again and to my disappointment one of the doors fouled against the operating shafts. I was sure they both worked initially.

What had happened is that I have not yet fixed my hopper body to the chassis, and the chassis had moved relative to the body, changing the relationship between the main operating shaft (fixed to the chassis) and the rest of the gear.

So the take-home message is this: "Make sure you mount your hopper body in the right place, it IS critical!" Thankfully all my hinges line up with the hinge point. If yours don't the gear may well foul.
Top

The lack of clearance was always a worry, as was the possibility of getting things in the wrong place, hence the use of the 3/32 rods through the body and underframe. Entirely unprototypical, but useful insurance. I'll admit that I had to get the grinder onto mine to improve the clearance, but that was because I didn't get the door stiffener gussets quite as well seated as they should have been.

The two photos show how the gear works for anyone following but not building. 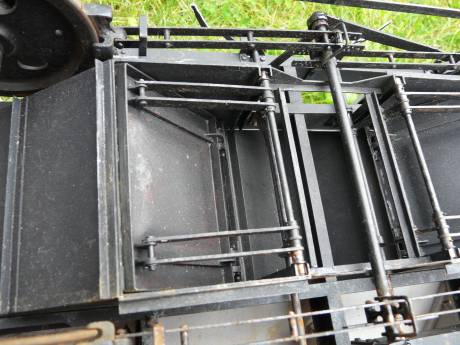 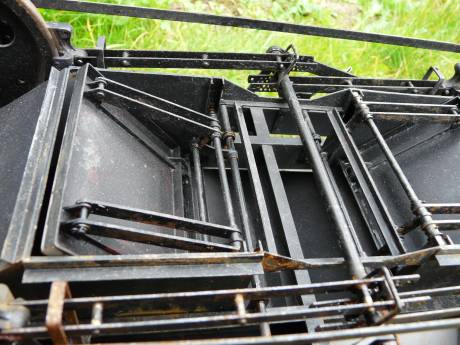 The first photo shows the door closed and locked, in the second one it is opening, it is the left hand of the cluster of 3 shafts which is the culprit. The other potential problem is the split pins, I found I had to reduce their head size to clear the shafts.

You can see some of the parts are getting quite rusty. I grit blasted part of the body (not the side in the photo below) before Gilling, and had to repeatedly apply brine with a brush to get it to rust quickly. Much of the brine ran down onto the underframe so that has deposits of rust on it as well.

Last photo is of the "modern" mineral stock at Gilling. 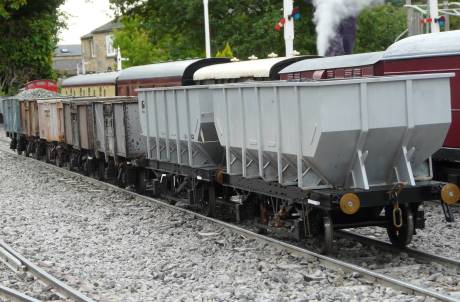 Here's the hopper running at Colchester, just need's it's transfers and some turning finished off to fix the shaft to the operating gear, and the bridge between the two door openings. 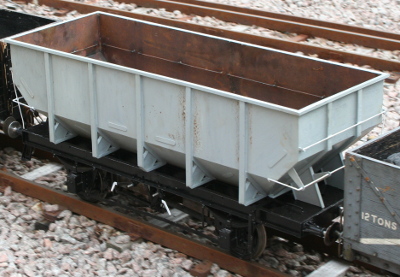 I thought I'd show the progress on my 21T hopper. I'm close to the end now, all the bits are made - just waiting for Dave to send the buffer stocks. I'm busy with the door gear and have completed a trial erection to see if everything fits and all the clearances are adequate. I now need to drill the pin holes and put it together properly. And then I can take it all down so I can clean and paint it. Hopefully painting and final erection will be done through Christmas when I can put in the angles at the hopper bottom.

Total time will be 8 months give or take which I suppose is about 200 hours of my time. Another will take less of course because I've wasted time through lack of knowledge of wagons this being my first. I spent a lot of time on the brake gear which surprised Dave, but he thought I would find the door gear difficult, but I've spent less than a week to get it to the stage I'm at.

I'm itching to get back to loco building now so I guess it will be some time before the rivetted LNER hopper will see progress, but at least I know how it goes together now! 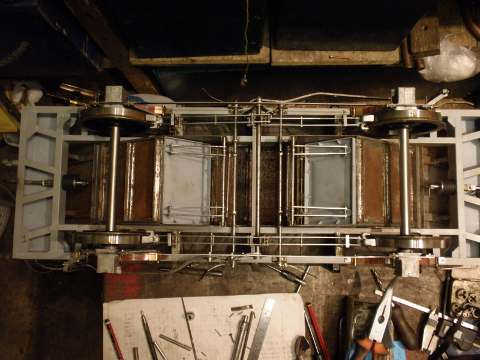 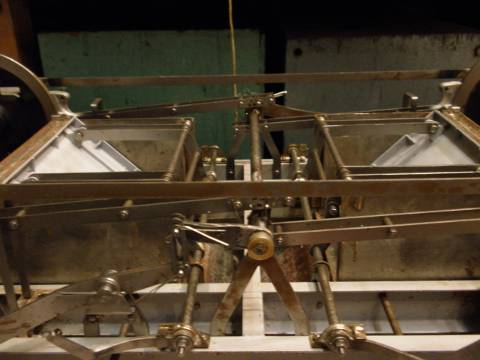 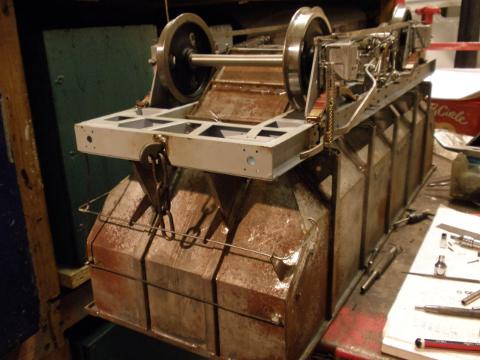 Finally can I wish everyone the compliments of the coming season. Here's hoping Santa is very generous and brings you just what you want.

Dave has uploaded another video of his and Bill's wagons which can be seen at http://www.youtube.com/watch?v=2h6Wt-Ys3W0 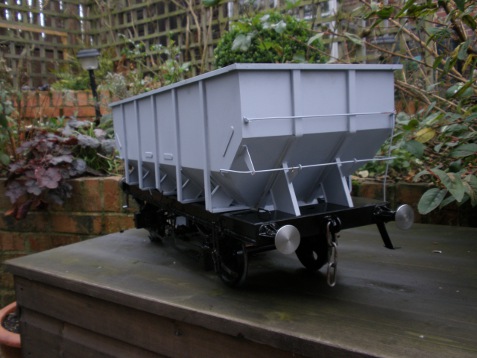 Here it is almost complete and ready to roll.

Looking good. It's interesting that the inner operating shaft support bearings are really required, I thought they were just copying the original prototype, but the shaft actually tries to bend at the full extent of the opening.

I just need wagon plates and transfers for mine now (and put the bridge in place between the hopper doors) - there is now a fleet of 4 complete? Not quite enough to keep a power station going, but enough to represent a coal train mixed in with some 16 ton mineral wagons.

It's surprising how long the other bits of the wagon take compared to the speed at which the body and the chassis can be put together. But then, I did move house and have a newborn in the middle, which cut into the building time somewhat!
Top

The forum has gone very quiet lately. I guess everyone is beavering away in the workshop and hasn't got time to write posts. My Hopper is done as far as I can get now, just waiting for transfers from Dave to finish it. 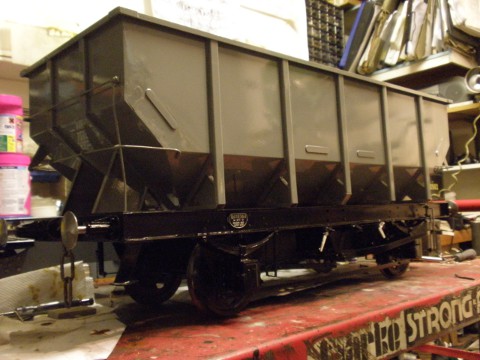 Back to building K3s now - at last

I'll be intersted to see how you get on with applying the transfers and protecting them with varninsh. You may aor may not know I had issues with the varnish i applied to the milk tank.

I recomend using a test piece of metal sprayed etc exactly the same as the hopper and work on that before committing to the model.

Thanks Keith, much appreciated.

I made no particular effort on the paint and it looks better in the photo than close up. Industrial I would call it. I can't say I've ever had problems with varnish on transfers, and I've done a few over the years, but there's always a first time. I see you are getting involved with water based paints. I will stay well clear of these for model work. When they get them to work properly I will try them. Certainly I've used them for decorating at home but they don't finish at all well. High gloss in water based means satin from all my attempts. Of course the oil based paint now has very low VOC content, which is great for the environment, except you have to endure the wet paint in the house for nine or ten hours to first set, which I presume encourages people to use water based.

My wagon is painted with Humbrol and will take the transfers and Humbrol or Phoenix varnish without difficulty - with luck and a fair wind.