This isn't strictly a GL5 topic, but as this is where the brains are, I thought I'd try here first.

I am drawing up the BR CCT (4 wheeled version of the GUV) for a future model, and an interesting point about couplings has appeared. The CCTs were fitted with screw couplings, and the usual way of attaching the drawbar on steel underframed stock was to pull on a plate welded between the longitudinals. On the CCT however, there is a very complicated fabrication which appears designed to take a larger pushing than pulling force. I puzzled over this for some time, and then had a thought, and a look at the photo of an upturned carriage underframe in the BR Mk1s book confirmed it. The fabrication on the CCT appears to be identical with the one on the Mk1 carriage. Gangwayed Mk1 carriages were all fitted with buckeye couplings and retractable buffers, the non-gangwayed stock had underframes with the same ends, but were fitted with screw couplings and ordinary buffers. As the underframe ends were the same, the non-gangwayed carriages had two conspicuous holes in each headstock which presumably would take the foot of a Pullman gangway if they were ever fitted with Buckeyes, as was done with some GUVs. There is no provision whatever on the CCT for fitting the bottom of a Pullman gangway, but like the Mk1s, the drawbar is set a couple of inches lower than the buffers.

So, the question is, was BR so manic on standardisation that they just built the same massively redundant structure into the CCT despite the increased cost, or, were they considering fitting some stock with Buckeye couplings without gangways, as is done on all North American goods stock? If so, was a CCT ever so fitted.
Top

Hi Dave, don't know the answer to that one but would suggest Doug H. will have some idea. I know he does not use this media generally so a phone might help. Happy New year to you and yours. Regards B.
Top

Help not really on the BR/CCT but on Buckeyes. I am at present build two racks of Pullman cars 16 in all
using Dave's buckeyes does any one have any thoughts on the best/simple way to control the side movement.
I needs to be soft enough to allow the buckeyes to travel side ways but not to strong a to hold the cars off line but it must return the buckeye to an almost dead straight line other wise the things will not couple up
My best effort so far seems to be a block of silicone ( not very engineered ) so thoughts please.
Maybe some from Gilling could assist.
Thank Ben Lyons

I don't think the buckeyes are intended to self centre. I've had a look at a photo of a Mark 1 underframe and can see nothing that would suggest a mechanism to centre the coupling and my experience with them in 12" to the foot is that they can be moved off centre manually to aid coupling on curved tracks. Pressure from the spring, which is double acting as it has to work as a buffer as well as a draw spring, might make the coupling tend to move towards centre, but it does not spring back if it is pushed to one side. You have to remember the buckeye is not a fully automatic coupler. It requires the shunter to release one or both jaws manually and he would automatically check the couplings were lined up before bring the vehicles together.

Hi Dave
Have a look at this clearly so sort of side springing might be able to do on next batch of underframe but as first 4 are done not much room to do anything.
thanks Ben

I've checked a number of drawings, and early GCR, all LNER, and BR Mk1's seem to have had side control. This makes sense because, as there is nothing to align the gangways, if the carriage ends were allowed to move sideways relative to each other then the gangway faceplates could slide across each other, a highly undesirable situation from the point of view of a passenger. 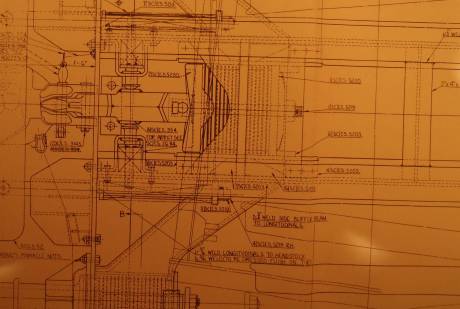 The big "horns" to the buffers indicate this drawing to be a BR Mk1, and it clearly shows side control springs, and these push on the plates cast on the Buckeye drawhook. I can e-mail you a better copy if you want Ben. Also, another drawing clearly shows that the back faces of the drawhook are to be machined or even ground to within 1/32". These faces pull up against the front follower, and this would I think, also give some centring action.

So much for the theory. Eddy says they can be moved sideways by hand. I'm guessing that either, the springs are so rusted that they don't work any more, or, that they have been removed for a reason which we clearly don't know about.

There must be someone out there who can stick his head under one and have a look.

As for your models Ben, one of the important things about the Buckeye is that it keeps carriages in line, so I would suggest some form of side control to achieve that end, and the simplest may be a leaf of springy bronze rivetted to the inside of each longitudinal. Then again, it occurs to me that your bogies may not have swinging bolsters, in which case you may have a problem.

re Gilling members, Bob "the beard" Willis is your man, he fitted the Buckeyes to their carriages. Keep us posted.

If anyone is interested in the original topic, the CCT drawings show no provision for side control springs. That probably suggests something.
Top 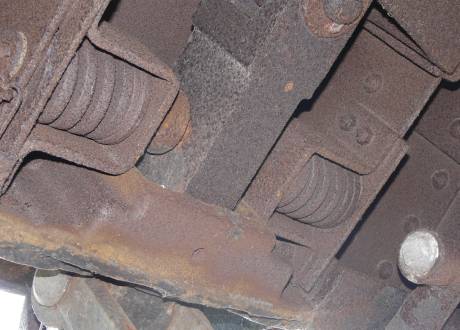 I should have added this, side control springs on an LNER carriage.
Top

I stand corrected on the side control, your evidence is overwhelming!

I agree with you that Ben might have a problem if his bogies have no transverse movement. The buckeyes have little scope to deal with relative movement between vehicles, being designed to prevent this in the extreme event.

Back on topic, the only non bogie vehicles fitted with buckeyes that I'm aware of were the LNER corridor tenders. I checked the frame arrangement drawing, and there is no sign of side control. Perhaps this is where my memory of moving buckeyes manually came from. These tenders are quite heavy at 30 tons empty and had very little overhang, unlike the CCT, and I suspect there could be a risk of derailment on tight or reverse curves with a lightweight vehicle, with a relatively rigid coupling.

Thanks for input would still like some info/Pictures from Gilling stock.
Tried out two cars over Brent's track and the buckeye move off centre around 3mm each way this was by eye as dam rain started ( Brent's place all but underwater) anyway seemed to work but will try again on some of the curves we are building set two up as an S should give same effect.
As to bogies mine are like Brents stock spring plank in u frame with rocking beam on top with bogie out from rotating around this. As you say little side travel the real thing gives only an inch but I will need to watch how the corridor connection works out given they are very short.
Picture shows bogie set up
Ben

Here's something interesting. As you noted above the USA runs all vehicles with buckeye couplers, both passenger and freight, and I think I'm right in saying that they don't run two axle vehicles.

I was looking for the dimensions of a modern UK bulk haulage wagon at work today as we are looking at a project for handling biomass imports to a power station and I came across a photo of an HTA coal wagon. It appears these were built in the 90's for EWS which is an American outfit and they were unsurprisingly buckeye fitted and devoid of buffers. Since then a large number of bogie bulk haulage wagons have been built for EWS, Railfreight and others but all have been fitted with screw couplings and buffers. I note also the Class 66 locos and other recent designs are also equipped with buckeyes as well as screw couplers. I wonder why they have abandoned the buckeye on the wagons. I suppose they are more expensive than screw couplers and in any case the wagons run in fixed formations which means they are not often split up so any advantage from quicker coupling is marginal. Perhaps one of our railwayman members has the answer.

Sorry, still no help with your CCT, but an interesting point nevertheless.

Eddyg wrote:I've had a look at a photo of a Mark 1 underframe and can see nothing that would suggest a mechanism to centre the coupling and my experience with them in 12" to the foot is that they can be moved off centre manually to aid coupling on curved tracks. Pressure from the spring, which is double acting as it has to work as a buffer as well as a draw spring, might make the coupling tend to move towards centre, but it does not spring back if it is pushed to one side. You have to remember the buckeye is not a fully automatic coupler. It requires the shunter to release one or both jaws manually and he would automatically check the couplings were lined up before bring the vehicles together.

Certainly on the 12" scale coaches I've played with (Not that many truth be known), the centre springing has a little give (You can push a buckeye an inch or two off centre, usually). It is however very difficult to get them hooked up on a curve. If on the straight and level, one jaw open is enough. On a slight curve, both jaws open. Anything tighter, very difficult indeed! Don't forget to retract the buffers either, otherwise you need a loco either end and a lot of compression to get them to release... Useless information for our purposes, but food for thought possibly.
As a side note, I don't think class 73's or 33/1's (Both buckeye and buffing plate fitted) have any centring on their drawhook's. I may be wrong....


Dave Noble wrote: Also, another drawing clearly shows that the back faces of the drawhook are to be machined or even ground to within 1/32".

There's a go no go gauge for that. I can't remember how much ware is acceptable, but it isn't much!
Top

Thanks to all for the input.
Bad news is that I've still not got an answer to my question though there has been some interesting discussion, and that's good.
By way of comparison, the same question was put on the rmweb site (much, much bigger than GL5) at more or less the same time and there have been only 259 views. AND, no replies.
That says something. Good old GL5 I say!
Thanks.
Top

Any theory I had is just guesswork, like same design team considering possible re-use of the frame, or trying to re-use fabrication jigs - but there can't have been any financial saving in it, unless there was some sort of test/approval process for the drawgear that would be expensive to repeat/redesign for what is effectively passenger-rated stock.
Top

Might be worth asking the question on the LNER Forum. There seems to be a few people on there that have considerable knowledge on wagons and coaching stock.